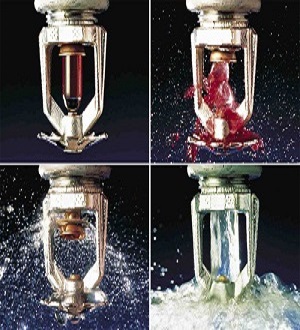 A fire sprinkler system is an active fire protection method, consisting of a water supply system, providing adequate pressure and flowrate to a water distribution piping system, onto which fire sprinklers are connected.

Sprinkler systems protect people, assets and the environment. They prevent an incipient fire that has not been detected in time, from turning into a widespread fire.

WET SYSTEM
For wet systems, the entire piping network leading up to the sprinklers is filled with water. Once the sprinkler system is activated, the extinguishing water flows over the wet alarm valve and the open sprinklers and targets the source of the fire. The wet alarm valve simultaneously alerts a constantly manned station via a pressure switch alarm. Wet systems should only be used in places which are not exposed to a freezing (+4°C) or overheating (+95 °C) of the extinguishing water in the piping network during the year.

DRY SYSTEM
Dry systems are only filled with water up to the dry alarm valve. The sprinkler piping network for this system type is then filled with pressurised air. If a sprinkler opens in the event of a fire, the pressurised air first escapes and the dry alarm valve then releases the extinguishing water to the sprinklers. However, the different specifications in the guidelines for dry systems must be followed as closely as possible.

TANDEM SYSTEM
Tandem systems are wet systems which are installed downstream to pressurised pipelines via one or several dry alarm valves for areas susceptible to frost or high temperatures e.g. small porches. The size of tandem systems is extremely limited.

PRE-CONTROLLED SPRINKLER SYSTEM
Pre-action fire sprinkler systems are filled with air and water is allowed to pass through when the smoke alarm or detector goes off. This type of system requires two triggers to start water flow. It helps greatly that the pre-action fire sprinkler can be set to prevent water from spouting in case of a false alarm or a mechanical failure. The pre-action system is good for use in places where the sprinklers are only necessary when there is an actual fire so other items in the building do not get water damage from an accidental sprinkling. Such buildings include libraries and data centers. These places contain items of high value like electronics and goods damageable by water such as books